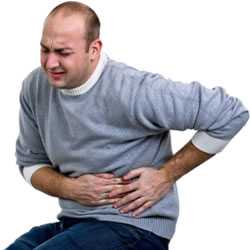 Constipation and dry mouth can arise from the antimuscarinic1 properties of certain antipsychotics. In rare cases, ileus and consequent serious intestinal obstruction has been associated with the use of clozapine.

Some antipsychotics (eg prochlorperazine) have an antiemetic action, for which they are used clinically; however, the antiemetic effects may mask organic disorders such as gastrointestinal obstruction or symptoms of overdosage with other drugs.

Oesophageal dysmotility and aspiration have been associated with antipsychotic treatment.

The risk of antipsychotic-induced constipation might also be increased by dehydration and immobility.

Warn the patient about constipation and advise measures such as exercising, taking plenty of fluids, and making dietary changes.

Effects such as constipation and dry mouth are dose-related and often diminish on continued treatment.

Nausea frequently diminishes spontaneously within a short period. Anti-emetics that act by antagonising dopamine (such as metoclopramide and prochlorperazine) should be avoided because they increase the risk of antipsychotic side effects and may provoke extrapyramidal symptoms.