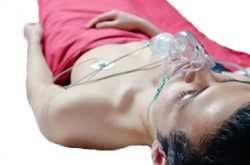 Opioid poisoning may follow inadvertent overdose in patients being treated with opioids or in addicts; a high dose of an opioid might also be taken deliberately in an attempt at suicide. Characteristic features of opioid overdose are:

Reduced oxygenation may be followed by hypotension, and in severe hypoxia, pupils may be dilated. Body temperature falls and the skin may be cold and clammy to touch. Convulsions may occur, especially in the very young. Death can result from respiratory failure and sometimes from pulmonary oedema.

Tolerance1 diminishes rapidly on stopping opioid use, and a dose that was tolerated previously could induce serious toxicity. Sustained-release preparations (or subcutaneous or intramuscular injection of an opioid when perfusion is poor) could delay or prolong toxicity..

Concomitant use of medicines, alcohol, and illicit substances can complicate opioid poisoning and it is essential to identify such use.

Genetic variation in the capacity to metabolise opioids may occasionally contribute to increased opioid toxicity.

Inadvertent poisoning from medicinal use (iatrogenic poisoning) of opioids can result from errors in:

Opioids should be prescribed, dispensed and administered with great care to prevent inadvertent overdose. The patient or the patient’s carers should be carefully counselled on correct dosing and administration.

Other medicines, especially those with CNS depressant effect, should be used with care to reduce the risk of harmful interaction with opioids.

Transdermal patches must be stored, used and disposed of correctly to avoid inadvertent opioid exposure to the patient’s household contacts including young children and pets.

The first aim of treatment is to restore effective breathing.

The opioid antagonist3, naloxone, rapidly reverses the effects of opioids and should be given preferably by intravenous injection, but it can also be given by intramuscular or subcutaneous injection. Naloxone has a short duration of action—monitor the patient closely for at least 6 hours and give further doses of the antidote if necessary. Excessive dose of naloxone can precipitate withdrawal symptoms in those with opioid dependency4.

Treat poisoning from other substances taken with the opioid. Convulsions that follow dextropropoxyphene or pethidine poisoning require treatment with anticonvulsants. The management of poisoning with buprenorphine (a mixed opioid agonist–antagonist) and with tramadol (with additional noradrenergic and serotonergic5 properties) may require additional consideration—seek urgent advice in case of serious poisoning.

In a conscious patient, activated charcoal can prevent further absorption if the opioid has been taken within the previous hour; however, you should guard against the possibility of aspiration.

For information on the management of a case of opioid toxicity, call the National Poisons Information Services (0844 892 0111) or consult TOXBASE (requires registration).

A healthy 1-year-old girl died within two hours of being put to bed. Autopsy revealed a transdermal patch in her stomach. She had died from fentanyl poisoning. The little girl had swallowed a fentanyl patch that had been lying on the floor.

Children have died of poisoning from opioid transdermal patches. The patch reservoir contains a significant amount of opioid even at the end of the application period (typically 3 to 7 days for buprenorphine and fentanyl patches). Young children might put a patch in their mouth or regard it as a sticker, tattoo or bandage. To minimise inadvertent exposure: