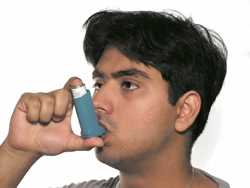 Opioids depress respiration by their action on the respiratory centre at the base of the brain but clinically significant respiratory depression is relatively rare with therapeutic doses. Excessive doses, especially in those who have not developed opioid tolerance2, can have serious respiratory effects (see Overdose). Opioids which are very rapidly metabolised (ie those with very short half-lives) are used for deliberate depression of respiration in artificially ventilated patients.

Individuals with asthma are particularly prone to an asthmatic attack when treated with an opioid.

Conditions such as sleep apnoea, pulmonary disease, emphysema, and even severe obesity can compromise respiration in those taking opioids. Head injury could increase the potential of opioids to reduce respiratory drive. Adverse respiratory effects are increased by concomitant use of other respiratory depressants such as anaesthetics and benzodiazepines3.

Avoid an opioid during an acute attack of asthma.

Advise patients to take care to avoid excessive dose of an opioid (eg inadvertent duplication of a dose). Avoid increasing the dose too quickly. In those at particular risk of respiratory depression, if an opioid needs to be given, select a lower initial dose; generally avoid use of an opioid in those with chronic obstructive pulmonary disease.

Treat bronchoconstriction4 with a short-acting beta2agonist5, such as salbutamol.