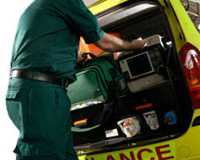 Serotonin syndrome1 is a rare but potentially life-threatening condition resulting from excessive serotonin transmission in the brain. Signs of excess serotonin range from tremor (especially tongue and fingers) and diarrhoea in mild cases to confusion, agitation, exaggerated reflexes (hyperreflexia2), rigidity and hyperthermia. Myoclonus (brief involuntary twitching or jerks from muscle) is another important feature that may be present.

Serotonin syndrome most often occurs when an SSRI is used concomitantly with another serotonergic3 drug, such as a tricyclic antidepressants4, monoamine oxidase inhibitor5 or an SNRI6 such as venlafaxine. Combination of antidepressant medications is not recommended except under specialist guidance.

The herbal remedy St John’s wort (Hypericum perforatum) has serotonergic activity and may contribute to serotonin syndrome if combined with an SSRI.

Serotonin syndrome is often overlooked or misdiagnosed. When switching between SSRIs or introducing drugs that can contribute to the serotonin syndrome, specialist medical or pharmacy advice is recommended. In particular, adequate time should be allowed for the ‘washout’ of one drug before commencing another.

Serotonin syndrome is a medical emergency and can be fatal. Urgent medical review must be sought. Treatment typically involves removal of the precipitating agent, the provision of intensive supportive care, and control of myoclonus7 and hyperthermia.