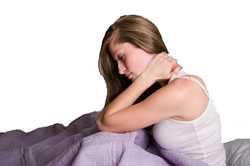 Severe withdrawal effects that follow attempts to stop a benzodiazepine can lead to prolonged use.

Tolerance to the effects of benzodiazepines is linked to dependence and involves long-term adaptive changes at the benzodiazepine receptors in the brain. These receptors interact with receptors for the major inhibitor neurotransmitter gamma-aminobutyric acid3 (GABA) which, in turn, affects other neurotransmitter systems, notably those producing excitation mediated by L-glutamic acid4. Receptors and cells adapting at different rates may explain varying rates of developing tolerance to the different clinical effects of benzodiazepines.

Dependence on benzodiazepines is characterised by the following features:

Some withdrawal symptoms may be indistinguishable from the symptoms of anxiety which led to benzodiazepine prescribing in the first place. Rebound insomnia and anxiety may be accompanied by other related effects such as:

Benzodiazepine withdrawal can also induce specific effects such as:

The risk of developing dependence (and of subsequent withdrawal effects) may be greater in those already dependent on other drugs or those with a history of drug or alcohol dependence. Individuals with personality disorder (within the fearful group—dependent, avoidant, obsessive–compulsive) may be at increased risk of dependence.

Prolonged use as well as high dose can increase the risk of benzodiazepine dependence. Long-term users of hypnotics, particularly among groups such as elderly women and elderly residents of care homes form a significant proportion of benzodiazepine-dependent individuals.

Switching from a benzodiazepine with a long duration of action to a short-acting one can provoke withdrawal effects. Significant effects can also occur if a benzodiazepine is withdrawn too rapidly.

The recreational use of benzodiazepines, often in combination with other substances, also carries a risk of dependence.

Those prescribed a benzodiazepine should be warned of its potential for dependence; the warning can be reinforced by means of the patient information leaflet accompanying the medicine and plain-language information from bodies such as the Royal College of Psychiatrists (see Further information).

Dependent individuals may also need to be warned about the risk of withdrawal-related epileptic seizures and advised to seek immediate help because this can be a life-threatening situation.

General principles for managing benzodiazepine withdrawal are outlined below. The advice largely covers management of individuals who, as a result of taking a therapeutic dose for longer than recommended, have become dependent on a benzodiazepine.

A local specialist will be able to advise on authoritative guidelines for benzodiazepine withdrawal especially when it involves dependence on doses which exceed those recommended for treatment.

A plan for benzodiazepine withdrawal should be discussed with the individual well in advance; a letter with an information sheet, possibly accompanied by instructions on relaxation, can be effective in reducing or stopping use. Individualised planning for dose reduction minimises the risk of relapse; the plan should take account of factors such as: the dose the individual has become habituated to; duration of use; type of benzodiazepine used; and the support available during withdrawal. Telling dependent individuals that withdrawing the benzodiazepine can improve cognitive and psychomotor function may help with successful withdrawal.

Benzodiazepine withdrawal can be difficult and is best attempted with support from family and health professionals, and with access to psychological therapy. Withdrawal may need to be conducted in a specialist centre for particularly difficult cases (eg dependence on high dose and abuse of multiple substances).

In established dependence, the benzodiazepine is generally withdrawn over about 8–12 weeks, but could take a year or longer in some individuals (eg because they have taken a high dose of a benzodiazepine for a long time).

The dose of benzodiazepine should be reduced gradually to avoid serious withdrawal effects such as convulsions and acute psychosis. For those on therapeutic doses, the daily dose can be reduced by about 10–12.5% every 1–2 weeks; in some cases the dose may need to be reduced even more gradually (eg by 0.5–1 mg diazepam equivalent). More rapid reduction increases the likelihood of severe withdrawal symptoms and may cause the individual to abandon withdrawal. In the right circumstances the individual can take charge of the withdrawal process and govern the rate of dose reduction.

For withdrawal, short-acting or potent benzodiazepines (eg alprazolam and lorazepam) should be switched, stepwise if necessary, to an equivalent dose of a longer-acting benzodiazepine such as diazepam—see table.

Twice as many women are long-term users of benzodiazepines as men?